Sahariya tribe is found in the North West part of the Madhya Pradesh. They are also known as the younger brothers of Bhil's. Due to the fact that it is the most backward tribe of Madhya Pradesh the government declared this tribe as special backward tribe. Sahariya tribe is losing its primitive nature and status due to the social changes, encroachment of forests and rapid urbanization. Due to the mentioned reason the government has taken some steps to protect the primitive nature of this special tribe.

Sahariya tribe is mostly found in the mentioned districts of Madhya Pradesh:


The main residential area of Sahariya tribe is the forest of Shahabad which is spread from Rajasthan to Guna of Madhya Pradesh.

Sahariya's people are generally of dark complexion and medium heighted. In general they are very weak as they are very fond of wine and use to consume it excessively. 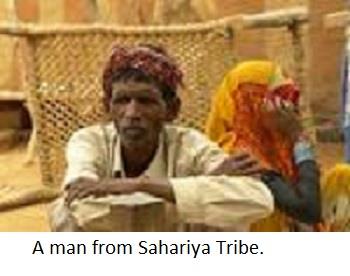 (This image is taken from en.wikipedia.org)

The residential place of Sahariya's is known as "Sahrama". The head of the family is honored with a title of "Patel", in the society level the leader is known with the title of "Pardhan". Pardhan use to do all the work just as the Patel do but at the society level. The main work of Pardha is to attend all the social functions like marriage and all the religious functions including betrothal. Pardhan is also responsible for the collection of penalties. This tribe has five panch in its panchayat and they are:


Along with these four panch the fifth member is the oldest person of the village.

(This image is taken from flickr.com)
Men and women of this tribe are fond of ornaments. Male are fond of wearing Chhelkadi murki in ears and Kanthi in neck, on the other hand ladies use to wear "Bor" in head, Fikar potta and Gutti aera in ears, a golden or silver kanta in nose and khagwari in neck.

Sahariya tribesmen are generally engaged in agricultural work. They either use to do cultivation on their own field or they are the agriculture laborers on some others field. They also collect forest products in order to sell it in cities market to earn their livelihood. They also depend upon fisheries, Kandmoal and phal (tree, Roots and fruits).

Sahariya's tribesmen are very expert in identifying the herbs. They collect herbs from the forest and sell it in the markets to earn their sustenance. Along with the herbs they are also experts in colleting honey and sells.

Sahariya tribe is highly influenced by the Hindu culture; they worship many Hindu God and Goddesses and also celebrate various Hindu festivals. By name the Gods are mentioned below:

As we had discussed that due to the influence of Hindu culture they celebrates many Hindu festivals and they are:

The Korku Tribe of Madhya Pradesh

Sir, can you please share some information on ornaments and jewelry used by this community?