Bharia tribe is one of the especially backward tribe of Madhya Pradesh. This position is given to Bharia's because still they are far away from the education and modern living. Bharia's consider themselves as the younger brothers of Gond tribe and hence they consider it to be a duty of them to marry with the Gond widow. Due to the mentioned reasons we can conclude that both these tribes are interrelated.

Bharia Tribe is found in many districts of Madhya Pradesh and they are as follows:

Especially Patalkot of Chhindwara district and Jabalpur are saturated from this tribe. The people of these areas especially of Patalkot are still living in their primitive way. Bhariya Tribe belongs to "Kolerjan Group". 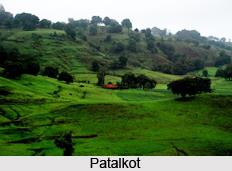 (This image is Taken from indianetzone.com) 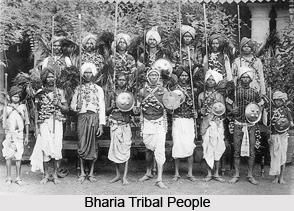 (This image is taken from indianetzone.com)

The head of Bharia's is honored with the title of "Patel". In the society of Bharia's different responsibility is allotted to different officers and the main officers are:

There is equal right for both men and women in Bharia Society. Bharia people follow the system of Gotra, two cousins having different Gotra can get married but a boy and a girl having same Gotra can't. Chhudi wearing system has great importance in their society.

Bharia's are economically very week that's why they generally use to live in Kuchcha houses made of wood, grass, bamboo and other trees branches.

Bharia's main dish is "Page". In general they use to have Mahua seeds, Mango seeds, floor chapatti, tree roots and fruits according to season. The people of this tribe are normally non-vegetarian and love to hunt.

The main dances of this tribe are listed below:

The people of Bharia tribe call them as Hindu and worship many Hindu God and Goddesses. They also celebrate some of the Hindu festivals but they are also influenced by other tribes hence they also worship tribal God and Goddesses, by name they are mentioned below:

As we had discussed above that Bharia tribe observe many Hindu festivals but along with this they also celebrates tribal festivals, by name they are mentioned below:

Previously they were temporary agriculturist but now they adopted it permanently. They adopted following things as their occupation: