Festivals and Poojas in Kapaleeswarar kovil 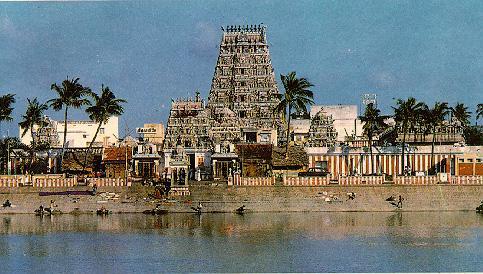 Mylapore, a busy area situated in Chennai is famous for its ancient temple "The Kapaleeswarar Temple". The Hindu literature gives a small story for the name Mylapore. It goes like this; Lord Shiva was worshipped by Shakti disguised as a Peacock (Mayil) because of which the area was named as Mylapore. The temple is situated at North Mada Street; Mylapore near Mylapore tank is a mix of ancient and modern times and is famous for its sculptures. The temple is available for dharshan from 5.00AM to 11AM and 4PM to 9.30PM. We all know the history and fame of this temple. There are various Poojas and Festivals celebrated in Kapaleeswarar temple in Chennai. We can expect a very big crowd inside and near the temple during this wonderful occasion. The festivals and practices in the Kapaleeswarar temple will be very special and exiting like the history of the temple. These practices are followed in the temple for many years. Follow the article below to know more about the festivals and Poojas happening in Kapaleeswarar temple.

History of Kapaleeswarar temple in Chennai

Kapaleeswarar temple was built by Pallava rulers in the 7th century and it is said that the temple was demolished by the Portuguese when they captured Mylapore. Later the temple was built again by Vijayanagar rulers 300 years back. Lord Brahma was disrespectful and so Lord Shiva was furious and detached one of his head (kapalam in Tamil). In order to get the blessings of Lord Shiva Brahma established a Lingam and worshiped Lord Shiva (Eeshwarar). So from the word Kapalam raised the name of the temple Kapaleeswarar.The main deities worshipped in this temple are Kapaleeswarar and Karpagambal. Kapaleeswarar is the name of Lingam present here and Karpagambal is said to be the Goddess who blesses people with what they have. There are a lot of Tamil epic and poems written about this temple.

The temple has a lot of importance for the various legends. Lord Muruga received his spear for sura samharam from Karpagambal. Sukracharya swamigal got his lost eye after getting the blessings from this temple. It is also said that Lord Rama worshipped at kapaleeswarar temple and so won the battle with Ravana. There are many more significant things about this temple.

Architecture of Kapaleeswarar temple in Chennai

The Dravidian Architecture style is accomplished in this temple. It has two ways and two Gopurams on East and West directions. The Gopuram has beautiful sculptures craved in it. The stone carvings and the sculptures are with perfection and mark the speciality of the temple. The holy storage tank has a silent effect and is the speciality during festival season.The temple also has a mandapam where the holy activities are conducted. The punnai tree which is considered as a holy tree also has a deity of Goddess Parvati as a peacock. They have a peacock and a peahen to describe the legend about Goddess parvati becoming a peacock and worshipping Lord Shiva here to become normal. The Pallava Kings have done a wonderful planning with respect to the architecture of the temple. This temple is now standing as a great master piece for the Pallava Kingdoms.

Apart from the two main deities namely Kapaleeswarar and karpagambal , the temple holds in it other deities like Lord Muruga, Vinayaka, Navagrahas and many more.Any temple will have processions either inside or outside the temple premises. For these purposes they have vahanas which are vehicles of the God or Goddesses. The vahanas present in Mylapore temple are peacock, goat, parrot, bull, elephant and a golden chariot. Hindu people join in the procession and pull these vehicles and the choice of vehicle is based on the happenings of the temple. The excellent architecture skills of Pallava Kingdom were not only revealed in the construction of the temple but it was also exhibited in the Chariot of the temples. Each and every thing in the temple were well planned and well exhibited.

Poojas in Kapaleeswarar temple in Chennai 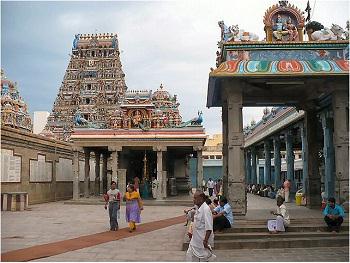 Although a great crowd of people are found only during the festival seasons, there are a lot of rituals performed on daily basis. The general poojas conducted for the deities on daily basis are four in number. These poojas are early morning pooja which includes the cow pooja, the day pooja , the prathosa kala pooja and finally the night pooja. These are the four kaala poojas conducted. Apart from these daily routines they also conduct personalised poojas for the devotees who request for it. They will have to pay as per the rate card of the temple decided by the authorities. These poojas include abishegam, archana, sagasranama archana and astothra archana. They also have online bookings for these poojas and it is performed on behalf of the person if they are not able to come. The prasadham is sent to them.Other poojas which are periodically performed are held on ashtami, pradhosham, shashti, full moon day and also during shivarathri.They also have other features such as ayushya hommam, ganapati hommam, Sudharsana hommam, Mahalakshmi hommam, Santhanagopala hommam.

We can also see a wonderful crowd in the temple during the month of Margazhi. There will also be wonderful decorations in the temple which is called the Kolam decoration. People of Mylapore also follow this custom of drawing wonderful Kolam during the season fo Margazhi. During this month people near the Kapaleeswarar temple draw Kolams in front of their house. As we all know Kolam has a great significance to the individual and also to the family as a whole. But when Kolam is drawn during the month of Margazhi it also gives a wonderful medical significance.

Festivals in Kapaleeswarar temple in Chennai

The temple is lightened up with a lot of crowd and the thiruvizha kalam is said to be in the middle of March and April. It is called as Bramotsavam or Arupathimoovar thiruvizha.it is celebrated for 9 days. It is started with hoisting of a flag, chariot procession, arupathimoovar thiruvizha and when the festival finishes they celebrate with the marriage for the prime deities in the temple. The whole festival involves a lot of processions on the vahanas. Each day different vahanas are used. The third day has Nandhi as the vehicle for the procession. Rishaba vahanam is used on the fifth midnight. On the seventh day the chariot is decorated and Lord Shiva depicted as holding the kapalam and Brahma is said to ride the chariot. The 8th day is the most important and the statues of 63 nayanmars are made to follow the procession behind Lord Shiva.

The Moovar namely Appar, Sambandhar and Thirugyana sambandhar are carried in separate vahanas. The festival is grand and a lot of devotees submit offerings to the Lord in the chariot. The temple provides a lot of sweets, juices, buttermilk etc. this festival is the spring season festival.

This is called as the light festival which is celebrated all over India and especially during the Karthigai month in Tamilnadu as Karthigai Dheepam festival. The light that we decorate is expected to bring glory and brightness to the family. This festival is celebrated in a grand manner in the Kapaleeswarar temple in Chennai. The holy tank is decorated and lights are made to illuminate and provide beauty to the tank. This festival is celebrated in the temple during the January. The rafts carrying the deities follow a procession.

Navarathri remains the auspicious festival of the hindus and this festival is celebrated in this temple with joy. It comes after the full moon day during August to September. Poojas are performed for Goddess parvati, Lakshmi and saraswathi. This festival is conducted for nine days.

The kapaleeswarar temple situated in the common region mylapore is sufficiently connected with transport and is the worship spot for so many devotees. One has to go to this ancient temple to het the blessings of Lord Shiva to fulfil our wishes. The holiness of the temple is pure and is a mix of modern and ancient times when it comes to architecture.