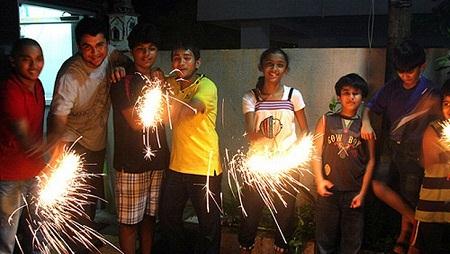 Festival is an occasion of celebration or feasting. It is an integral part of a person in any part of the world. A festival generally describes or depicts the culture of the country in which it is celebrated. Thus festivals of India proudly speak about the culture and tradition of India. Festivals of India are mostly of religious significance. These festivals have unique legends and a story behind each festival describes the cultural heritage of our country. One of these and the brightest of all is Diwali. It is also known as the festival of lights. Diwali is celebrated in so many different ways in different parts of the country but the joy, enthusiasm, splendour and goodness remains the same. Chennai is a place with people from all the parts of India. Diwali is celebrated in such a way that it shows how people celebrate it in various other parts of India.

Diwali is a festival that brings light in the life of all Indians and it signifies the "unity in diversity" of India as every state has its own way of celebrating Diwali. The History or origin of Diwali is one of the interesting stories told to small kids by their grandparent .There are various legends pointing to Diwali but commonly the festival is celebrated for five days mostly in the beginning of November and each day has its own story. The First day is called as Dhanteras, Dhanwantari Triodasi or Dhantryaodashi. On this day Lord Dhanwantari came out of the ocean with Ayurveda for mankind. Narak Chaturdasi marks the second day of Diwali and it is celebrated for freedom from evil power. This is the day on which Lord Krishna killed the demon king Narakasur. The third day is Amavasya and on this day the Hindus worship Lakshmi, the Goddess of wealth and prosperity. It is said that Goddess Lakshmi was rescued from the prison of tyrant Bali. The fourth day of Diwali is called Padwa or Govardhan Puja. On this day, Govardhan Pooja is performed .The Fifth day is called as Yama divitiya .It was celebrated by the subjects of Lord Rama for his return from Ayodhya after Fourteen years by bursting crackers.

Diwali, one of the most important festivals of India is celebrated in various parts of the nation in different ways. Here we discuss about how the festival is celebrated in north, south, east and west regions of India. People from these regions who live in Chennai will celebrate Diwali in the following manner.

Northern India:
The legend pointing to Diwali in North India is according to the Hindu epic Ramayana when Ravana was killed by Lord Rama after fourteen years of vanavasam. In the northern states of Uttar Pradesh, Punjab, Haryana, Bihar and the surrounding areas huge effigies of Ravana are burned celebrating Lord Rama's vanquishing of the demon king. They wear new clothes and the night of diwali involves celebrating with fireworks. They worship Lord Rama and Goddess Lakshmi. In Delhi purchasing any utensil or jewellery on Dhanteras is a must. Every street corner has a Ramlila play performed in the evenings. In Jammu & Kashmir Diwali keep a fast and worship Goddess Lakshmi. Punjab celebrates it by lighting the golden temple with lamps.

Eastern India:
Eastern India celebrates Diwali with great enthusiasm and diversity .In Bengal people worship Goddess Kali and light candles to worship their departed ancestors. This region also involves the other activities such as wearing new dress, bursting crackers and lighting lamps. The state also makes structures called pandals with articles like bamboo, which depicts Goddess Kali. Assam celebrates Diwali by burnings diyas,mithais and decorating doorways with garlands . In Orissa the family members burn Jute stems by illuminating the dark path through which the souls of their ancestors come and return to heaven.

Western India:
In western states Diwali is a four day festival. Gujaratis start their celebration by depicting images of deities by rangoli in the night preceding Diwali. Small foot prints are laid on every doorstep to invite Goddess Lakshmi. On Narak Chaturdasi they smash fruits and burst crackers to celebrate the victory of killing the demon Narakasur. On Lakshmi puja people of western regions worship Lord Ganesh and Goddess Lakshmi. The Padwa is an auspicious day to begin any task. They also start the new accounts on this day. The last day is to signify sibling bonding.

Southern India:
In South India Narak Chaturdasi is the main day of celebration. People start their celebration in the dawn with oil bath and Lakshmi puja. The celebration also involves sharing of sweets with friends and relatives. Homes are washed and decorated. Newly married couple celebrate Thala Diwali with the Bride's family. They celebrate after getting the blessings from elders for a happy married life. The groom's parents also join the celebration.

Significance of Lights and Crackers during Diwali celebrations

Every Festival has a significant philosophy behind it and the way of celebration stays related to the philosophy. It is said that the sound of crackers and the lights indicate the joy of the people living in the earth. It is like a thanks giving to God for our plentiful state. The thought of light from darkness is for all the evil power to vanish and joy and prosperity for the coming year. A scientific significance of the fumes of crackers might destroy the insects found in plenty after the rains.

Diwali, the festive of lights is the grandest festival celebrated by Indians throughout the world. Although the fun is the prime motive of bursting crackers, there are a several threats due to pollution. Green house awareness has reduced the craze towards bursting crackers. The fumes from the toxic substances of fire crackers causes air pollution and the noise from the crackers cause noise pollution. Child labor is also a major concern of bursting crackers. The child laborers produce crackers with toxic material get sick during their early teenage. Fun in its limits is a boundless joy during festive season. Diwali not an exception stays the most joyful event for Indians, if celebrated safely and by being more sensitive to nature.