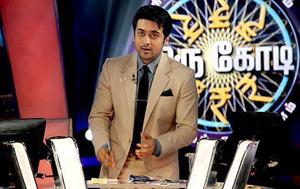 NVOK show is the first show in Tamil channel offering its price money to such a big amount of one crore. The show is telecasted by star vijay tv. The channel telecasts many reality shows by offering and encouraging the talents of Tamil people and providing opportunities. This show is the remake of the Hindi reality show 'Kaun Banega Crorepati' by the legend hindi actor Amitabh Bachan. The show made a huge hit in the Hindi small screen. This show has been telecasted by Star tv. The show has been telecasted every weekdays in the night time. The show has also invited many celebrities for the game show to promote the show.

In Tamil this show has gathered many fans and viewers for its knowledge and for Actor Surya. The show is hosted by actor Surya of Tamil cine industry. Surya is a very famous actor among the Tamil industry. He is well known for his romantic acting in most of romantic movies and created a spell in the heart of most Tamil girls. Most of his fans are girls and kids.
Surya is a wonderful actor cum person in real life. He has possessed his multiple careers in film industry. He is very well known and famous for marrying the actress Jothika. The couple was very famous among the cine industry known for their love and cuteness. 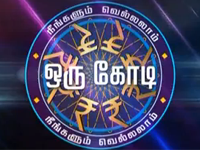 Nengalum velalam oru kodi is a reality game show purely based on general knowledge quiz. The price money you can win up to one crore.
The game has two categories.

First category is the minnal viralgal round:
In this round a question will be popped out and the contestants have to arrange them according to the question given. There will be around ten to fifteen contestants competing among them only one will go to the hot seat to play. The contestant who gives the answer fast in less time of seconds/minutes will be the winner and will take the hot seat. This will push them to second category.
Second Category:
The second category is to play and win the amount in a tricky and intelligent manner. There will be blocks of money in the money tree , when you reach each block of the money tree though you get out in between you can take the amount you won in the last block of money tree.
The first block will be 10,000
The second is 1 lakh and the final is 1 crore.
The show is based on general knowledge question, can be asked any kind of questions on any categories Indian / world history, cinema, literature, maths, science, English etc..
The show audience were very much surprised and happy to meet actor Surya in real near them. Many bring their children who were great fan of him. Many come to the show to visit actor Surya and for their kids to meet Surya.

Information About The NVOK Show:

The show is telecasted every weekdays from Monday to Thursday except friday during nigh time in Star vijay tv.
The show happens in the AVM Studio, you can visit them and get details to participate in the show as audience.
Timings:
10.00- 11.00 PM